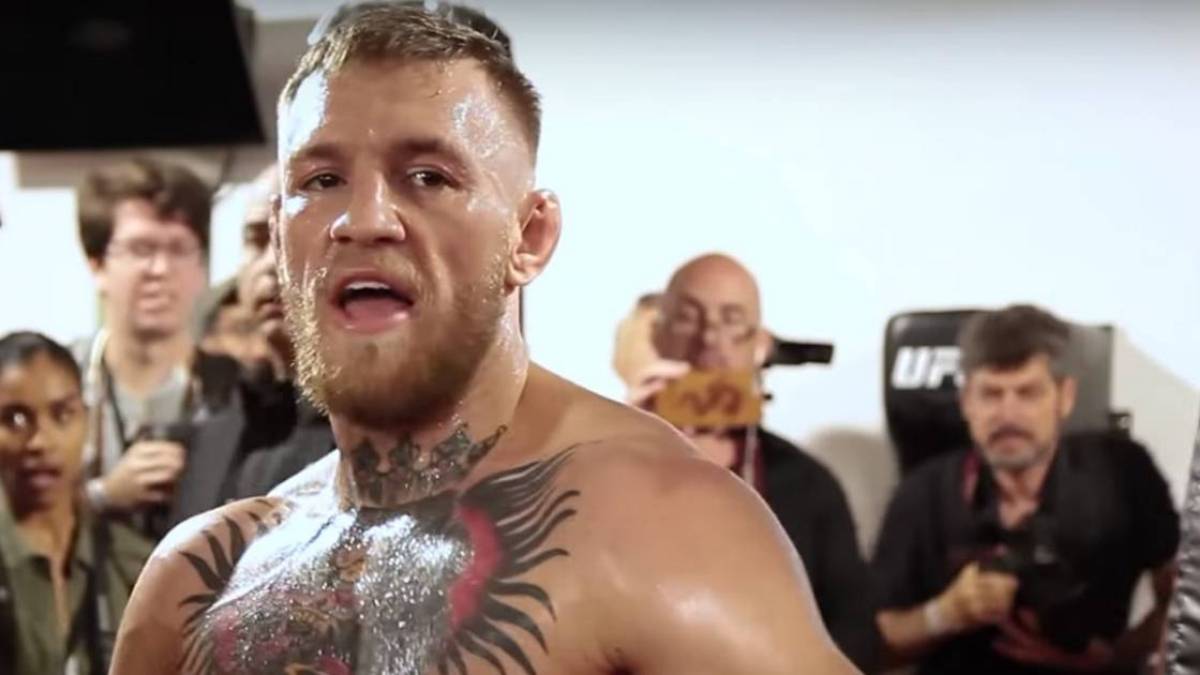 Conor McGregor is one of the richest fighters to come out of the UFC. He is now one of the most well-known personalities in the fighting world, not just in MMA.

McGregor has built quite an empire with his fighting career, endorsements, and his whiskey business. He is a former UFC Lightweight and Featherweight Champion, and Conor McGregor’s total net worth is over $200 million, much more than the Khabib Nurmagomedov who was undefeated and even beat ‘The Notorious’.

McGregor understandably gets a good amount from his endorsements and earns well in his fights due to pay-per-view sales.

Conor earned a total of $32 million in victories and $16 million in endorsements in 2020 alone. He got paid $5 million a year for the Reebok sponsorship of UFC too as he was one of the main fighters at the time and this was before Venum became the sponsor.

He also has endorsement contracts with companies like Burger King, Monster Energy, Beats By Dre, EA (Electronic Arts), Wynn Resorts, and the list goes on!

Former UFC champion Conor McGregor has made some intelligent investments since which has made his net worth grow even larger.

He owns part of the whiskey brand Proper Twelve that he co-founded with his agent and just last year they sold off a majority stake in the company to Proximo Spirits.

He also owns a media house, The Mac Life, a menswear brand, August Mcgregor in partnership with David Heil, a sports management company, Mcgregor Sports And Entertainment, a conditioning program named F.A.S.T., and a sports recovery line TIDL among many other profitable businesses.

The whiskey brand singularly generates around $40 million every year. It is roughly valued at $235 million. His media house has managed to gain millions of YouTube subscribers and more than 700k Instagram followers by covering MMA, lifestyle and fitness.

Conor’s menswear brand and sports management company generate money through advertising and several other promotional activities. McGregor’s conditioning program helps people that fight to get in shape quickly with the help of leading sports doctors and exercise physiologists. His sports recovery line helps cure pain and inflammation directly at its source through a plant-based therapy.

McGregor also invests in a lot of luxury cars and houses. His Las Vegas mansion was priced at $2,995,000. Conor’s Dublin mansion named the Mac Mansionis was priced at $2 million at the time he bought it.

He also owns a villa in Marbella, Spain, and will probably be on the lookout for more properties too.

McGregor has won a lot of championships in his career and it is these headline fights that helped him amass large amounts of money via UFC pay-per-view. Some of his highest selling pay-per-views events have reached a revenue of $180 million with a buy rate of $2,400,000.

The MMA fighter’s professional boxing debut against Floyd Mayweather Jr. in 2017 got him a $100 million payout although he had already received $30 million before the bout.

At UFC 246, against Donald “Cowboy” Cerrone, Conor got $3 million and another $30 million in sponsors and PPVs.

It’s said that his fight with Khabib created a UFC record 2.4 million pay-per-view buys. Plus, even though he lost, he got a bigger payout than the Russian due to his stardom at the time.

Conor McGregor’s Net Worth in 2022

You can estimate Conor Mc Gregor’s net worth in 2022 to be a whopping $200 million. He has already been known to have claimed that he aims to be a billionaire. With a great number of wins and planned investments into his different kinds of businesses, the UFC fighter is already minting millions.

But it’s not limited to just earning. He also does philanthropy work with charities like Children’s Medical Research Foundation, Focus Ireland, and Tunnel To Towers to name a few. In all, Conor McGregor is a talented and smart fighter who has set out to achieve it all.

Israel Adesanya is one of the most famous UFC fighters of his generation. Although born in Lagos, Nigeria he spent his teens growing up in New Zealand. His UFC career has allowed him to amass a great net worth of over $5 million.

He is a professional kickboxer and mixed martial artist that still is unbeaten. He defended his UFC middleweight title in February and will again in July this time against Jared Cannonier. Even if he losses, his net worth will still increase but not as much as if he is to win.

Israel has several accomplishments under his belt. Apart from being the current UFC middleweight champion, he is known to hold the title for the most knockdowns in a UFC fight.

He is also the Australian Fighting Championship winner in the middleweight division. This superstar boasts a middleweight championship under the Hex Fighting Series too. Adesanya has the second longest winning streak in the UFC middleweight history. He has titles for Performance of the Night and Fight of the night. Additionally, he earned the 2019 Halberg Award for sportsman of the year in New Zealand.

Out of many of his amazing accomplishments, Adesanya is also quite the dancer. To a lot of people’s surprise, he partook in many dancing competitions when he was in New Zealand. He is truly a jack of all trades.

Israel Adesanya has a net worth and salary in 2022 of over $5 million. Adesanya has earned over $540,000 a fight with Yoel Romero. He also earned an amount of $590,000 in a fight with Paulo Costa. This was by far Adesanya’s highest take from one fight. His total career earnings are $3,910,500 but this is without endorsements.

To add to his wealth Adesanya hopes to start his own anime company when he retires from kickboxing. In fact, his nickname ‘The Last Stylebender’ comes from his love for Avatar: The Last Airbender.

As far as sponsorship deals, he has done very well for himself. Adesanya currently has endorsements with brands such as Peak Milk, Puma, Engage, and Reebok. He also had one with BMW in the past. More brands will continue to reach out to him as he has over 6 million followers on Instagram and this will no doubt keep growing.

One of his most recent partnerships is with the supplements brand MyProtein. You’ll see these posts on his social media. As well as it looks like he’s teamed up with one of the largest crypto betting sites Stake to promote them.

Israel Adesanya’s fanbase on his active social media accounts. He currently has 6.4 million followers on his Instagram, 1.1 million Twitter followers, and 696,000 YouTube subscribers support him. This is a man that knows how to brand and market himself to draw more pay-per-view purchases.

He is very entertaining by nature. Besides avid UFC fans, he has a fanbase that stems outside his industry. This goes to show that he is loved by many. He is also a person who values simplicity and has great moral values. This is the reason many gravitate towards him. He has won many hearts across the globe. 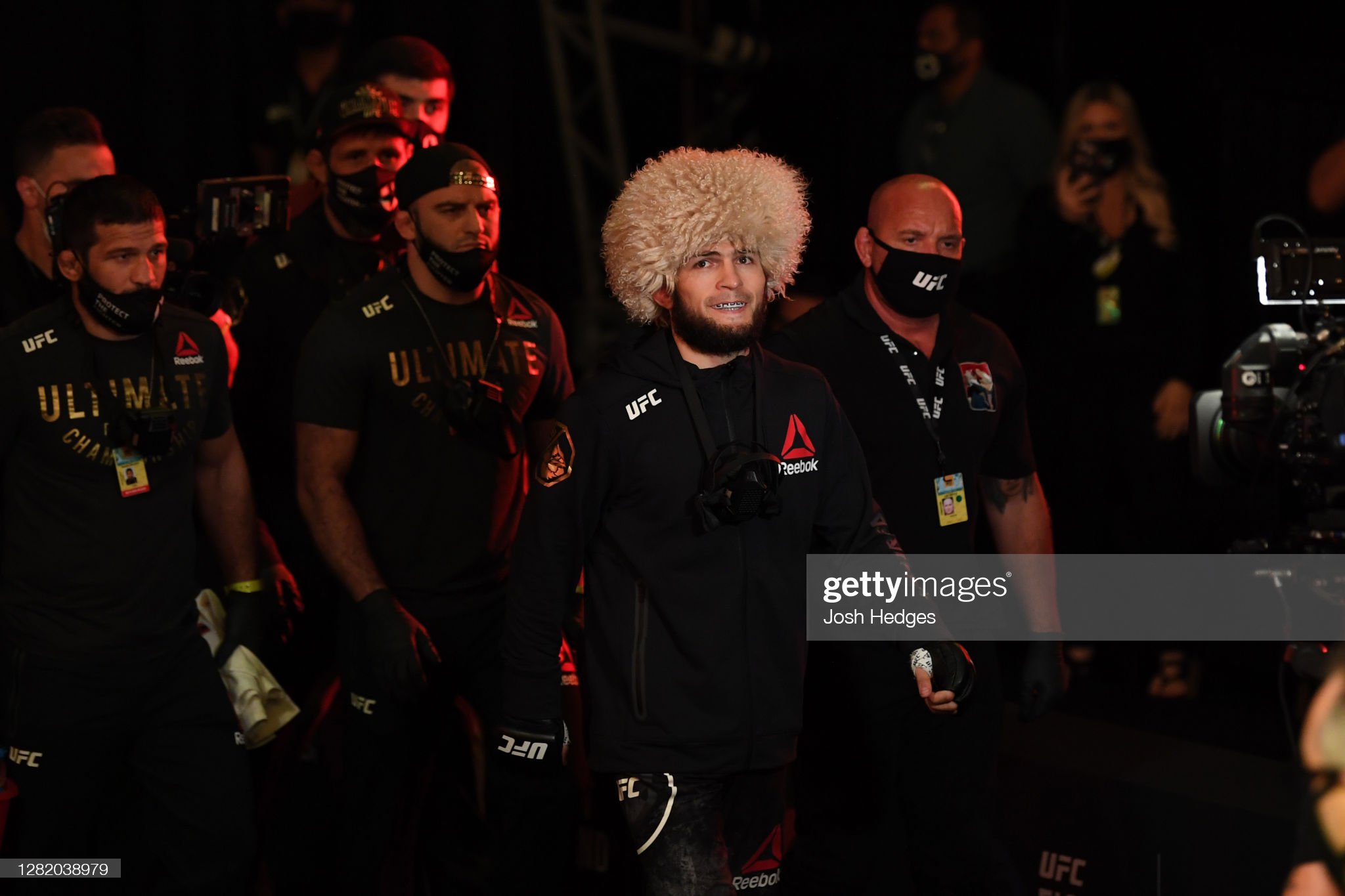 Khabib Abdulmanapovich Nurmagomedov, the retired Russian professional Mixed Martial Arts (MMA) fighter remains one of the richest in the sport. Khabib is an undisputed UFC lightweight champion with a record of 29-0 in his fights.

His amazing record includes wins against legendary fighters such as Conor McGregor and Justin Gaethje. Find out more about the fighting colossus below.

Introduction to his MMA career

Khabib is a renowned MMA fighter who was coached by his father Abdulmanap Nurmagomedv. Abdulmanap holds the title of honored coach of Russia. He was himself a renowned freestyle wrestler in his country earning several accolades.

Born in 1989 in Sildi, Khabib took on a fighting career very early due to his father’s influence. He became a career fighter when the UFC sport started gaining popularity around the first decade of the 2000s. He was a born champion ending up with one of the longest winning streaks of 29 fights undefeated in the lightweight category. His most memorable victory was gained against Conor McGregor, the richest UFC fighter by 2022.

His father Abdulmanap, wanted him to increase his record to 30-0. This could’ve happened if he faced then reigning middleweight champion, Georges St. Pierre. However, he was forced to retire before the fight could materialize when his father passed away. His mother did not want him to fight anymore and he obliged. Both fighters are now retired so we doubt we’ll ever see these two face off.

Khabib had a net worth of $40 million in April 2022. He has several sources of wealth. These include MMA fighting, books, endorsements, and businesses.

The greatest source of this wealth is payouts from his fights. However, being a popular figure in his country and across the world, more endorsement opportunities keep coming his way.

He continues to remain active in the field of MMA despite his retirement. He is called to speeches and participates in talk shows. These continue to boost his income as an MMA personality.

How much he can still earn

Khabib is still able to earn a lot of money despite having retired from active fighting. He is still capable of making money from endorsements of commercial products.

Moreover, his investments in such ventures as speaking engagements, Eagle mobile, and Octazone will assure him of many more millions in the future.

Being such a legendary figure in the MMA sphere, there is no doubt that he will remain an important figure in the sport. Unlike his father, he has not actively ventured into coaching, but that space still beacons him as well.

How much he got fighting McGregor

The Russian fighting colossus earned $2 million from his fight with Conor McGregor. However, the brawl that followed the fight cost him $500,000 in fines. Still, he took home a cool $1.5 million from the fight itself. It is, however, not quantified how much he made from PPV and sponsor bonuses in that fight.

This was easily the highest-profile fight of his career. It was bigger than even his championship triumph over Justin Gaethje. That is because of the fame that McGregor commanded at the time. The fight drew 2.4 million PPV buys, which is the highest in UFC history at around $180 million.

So Khabib earned much more from the fight from these views. The fight also drew in a lot of sponsorships due to its high profile. It remains one of the most watched matchups in the history of the sport.

When the history of MMA is written, Khabib Nurmagomedov will remain one of the biggest influences in the sport. This will be both as a great fighter who never tasted defeat in a long career and one of the richest in the game.

Undoubtedly, more great fighters will come and go over time. Nevertheless, Khabib will remain among the historical elites of the sport.